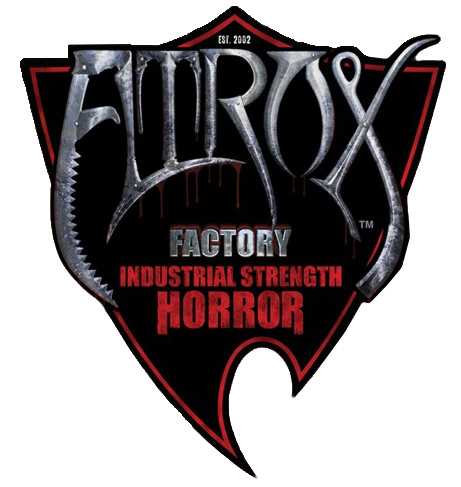 INDUSTRIAL STRENGTH HORROR! Alabama is home for many southern traditions. Birmingham was known as “The Steel City” back in its industrial days.. Not far from there, in Leeds Alabama, lives Atrox Factory®, known for its “Industrial Strength Horror”

Back in the late 80’s when the Birmingham Jaycees was the haunt to go to, and in the late 90’s when Slain Manor® ruled the Scares in Alabama. The guys doing Atrox Factory® had a huge hand in both of those great Halloween traditions.

With the Scream Team’s combined 60 years of experience, makes me think they know a little something about haunting.

The thoughts behind the team seems to be to not only give the southeast a bad ass haunted house and the run for their life, they let the general public meet their favorite horror celebrities with their Horror Celebrity Weekends

Atrox Factory ® has brought in every horror celebrity you could name.. From Linda Blair to Elvira®, to Robert Englund and every one in between.. No haunted attraction out there has ever offered such appearances… Period…Adding additional entertainment for their patrons has always been part of their attractions from day one..

Atrox still believes that the customer decides on who is the best, or the scariest, etc., and are still humbled with the following they have..

Now, 2019, and after 17 years of Atrox Factory®, these masters of Horror are turning up the notch once again.

Atrox Factory® will be waiting to hear you scream!!!

NETHERWORLD, Atlanta’s most popular self-guided, dark attraction, is one of the most highly-acclaimed Haunted Houses in the world. Known for its over-the-top special effects, unique make-up, elaborate costuming, skilled stunt actors and unusual themes, NETHERWORLD has established itself as an Atlanta Halloween tradition. Since the attraction first opened 23 years ago, NETHERWORLD has been voted the top haunt in the nation by publications such as Hauntworld Magazine, Dread Central, Fangoria and USA Today and has been recognized both locally and nationally by media including CNN, The Today Show, The Early Show, The Travel Channel and Wall Street Journal. Every season, this innovative horror experience continues to draw in generations of thrill-seekers eager to see what new nightmares have been unleashed!

*All ticket sales are final no refunds or exchanges.